[ permalink ] [ GoogleTrack ] [ e-mail me ] [ >> ]
Busy, busy, busy. This is the first time I've been able to sit in front of the computer (work excluded) for more than 20 minutes at a time in over a week, I think. Here are some random things for you:
Instructions For Installing Notes Client On Linux (Thursday, Jul 14)

[ permalink ] [ GoogleTrack ] [ e-mail me ] [ >> ]
As promised, here are some instructions for using the Lotus Notes client on a Linux desktop:

How to Use Lotus Notes on Linux with Wine

Parts of the instructions are fairly Ubuntu 5.04-specific, but if you use your head a little you should be able to adapt them to other Linux distros as well.

[ permalink ] [ GoogleTrack ] [ e-mail me ] [ >> ]
All rightie then. I've got Ubuntu up and running on my test box, including the elusive Lotus Notes: 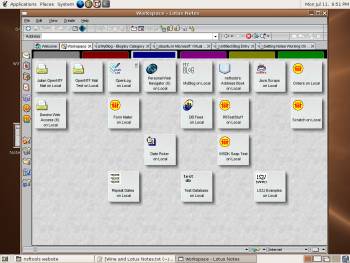 I'll go into more detail about getting Notes running in my next entry (part of the trick was making sure I was using the 20041019 wine build). In the meantime, this blog entry was written with a Notes client running on Ubuntu, uploaded from Ubuntu using gftp, and previewed with Firefox on Ubuntu. All Linux, all the time.

I'll need to do a little more testing before I know if Notes is "all the way there" for me, but at the very least I know I can compile and run LotusScript using Designer, and even run a graphical Java agent that uses AWT (which I had been unable to do a year ago).

Otherwise, I can browse the web (Firefox), read my e-mail (Thunderbird), play my music (XMMS), edit documents (OpenOffice), and manipulate images (Gimp). That's about all I need these days.

And by the way, I'm using an old 300 MHz Pentium with 192 MB of RAM and a built-in videocard for testing. And everything runs! I've got wine/Notes, Firefox, and 3 or 4 other windows open right now, and I even opened and used Gimp to shrink the screenshot at one point. Not quite as snappy as I'd want on an everyday machine, but pretty darn impressive. The specs on my everyday machine are certainly much better than that, so if everything runs on this old clunker...

[ permalink ] [ GoogleTrack ] [ e-mail me ] [ >> ]
I played around a bit with Ubuntu today, since that's the hot new Linux flavor right now, and I'm all about the hot new flavors. It was pretty nice. From what I can tell, Ubuntu may be good for Debian as a whole.

In an attempt to be a good Internet citizen, I also updated the How To Configure Ubuntu For Microsoft Virtual PC page on the Ubuntu wiki. It only had information about setting up the video, so I added sections for getting sound and networking set up properly.

At some point, I'll probably try to get a Notes client running under Wine too. I've done it before, and I think I can do it again (no matter what kind of problems Chris Linfoot is having -- I'm always up for a challenge). I'm going to start with:

and see how far that gets me.

I even saw some good information on getting Lotus Notes to open attachments properly in Wine recently. Who says you don't have to hack the registry in Linux!
;-)

UPDATE: it seems that the problem Chris Linfoot has (100% cpu utilization with the Notes client) is probably due to bug #2660. According to the bug report, the problem has been fixed, but the fix has only very recently been added to the cvs tree -- possibly only last week. So I'm not sure that the fix made it to the most current release, which is Wine 20050628.

It sounds like the bug was actually a regression that was introduced early this year, so everything might work properly with Wine 20041201.

[ permalink ] [ GoogleTrack ] [ e-mail me ] [ >> ]
Tomorrow is the Fourth of July -- Independence Day in the United States -- celebrated by grilled meat, cold beer, and exploding fireworks. Here are a few things that will be on my plate:

Grilled Bratwurst
There are a few tricks to good grilled brats:

Over medium heat, you only have to grill the brats for about 3 minutes per side; just enough to get a few good black lines on there, and slightly carmelize the beer that's left on the skin. You can grill them longer if you like the casing to be a little more cooked, but that's how I do 'em.

Burgers
I know, burgers are so... bourgeoisie. But done right on a grill, they still taste great. Here's how I do mine:

In a large bowl (the kind you'd toss a salad around in) mix:

Obviously if you need more than 1.5 pounds of hamburger for your dinner crowd, you can adjust accordingly. (UPDATE: I had the proportions a little wrong in the original posting. Apologies to anyone who put too much seasoning in before.)

Anyway, just throw the ingredients and the meat in a huge bowl and start working it together with your hands. Once everything is reasonably mixed, make your patties and start grilling. On my grill, it's usually about 6 or 7 minutes per side on medium heat for decent sized burgers. The olive oil and Worchestershire sauce help keep everything nice and juicy.

Beer
Yeah, I just put that one on the list for completeness sake. Pick your favorite brand. Drink during food preparation, while you're grilling, and as you're eating. Enjoy life.

A Pox Upon Your House (Friday, Jul 1)

On the subject of domestic happenings, here's a funny little thing that recently occurred in the Robichaux household:

In my son's room one night, I noticed a strange smell. I couldn't quite place it, but it was a bad smell. Smelled kind of like... ass.

I searched around and around, occasionally stepping back out to the hallway to clear my nasal passages and then jumping back into the fray, sniffing madly. It wasn't the boy, it wasn't the clothes hamper, it wasn't a week-old bowl of Froot Loops. I just couldn't find it.

And then I went into the adjoining bathroom and sniffed around some more. I finally narrowed the smell down to the bathrobes that were hanging on the door and removed them. But the smell wasn't quite gone yet. It wasn't even going away. It was still there, dammit.

On the ledge right next to the bathrobes was a flashlight. I picked up the flashlight, smelled it, and started gagging. Bleh.

The flashlight was brand new -- it was a big D-battery job we found in the $1 section at Target and figured the kids would like it. Unfortunately, in the wide open space of the Target shopping center we didn't notice that the rubber grip smelled crotchy and disgusting.

I've since sprayed the thing down with Febreze and wiped it with multiple disinfectant wipes. Nothing can conquer the hideous smell. I may have to throw it away (or leave it on a neighbor's doorstep).

I guess that's why it was only a dollar.