[ permalink ] [ e-mail me ] [ ]
I was going to write up a nice long, detailed explanation of how to add the new OpenLog JavaScript logging to a Lotus Notes form, but I figured a Flash demo would be much better. So here you go (click the picture):

Sorry for the big ol' Flash file (@ 2.5 MB). Better than bullet points though. And besides, the text instructions are in the OpenLog database Help docs.

[ permalink ] [ e-mail me ] [ ]
Late tonight, I posted the OpenLog 1.5 BETA release. That's the one with the JavaScript error handling for web pages, and RSS feeds for notification. More later, because I'm tired now.

[ permalink ] [ e-mail me ] [ ]
Okay, okay. I'm finally going to release version 1.5 of OpenLog on Wednesday. That's the version that Rob McDonagh and I presented at Lotusphere, with the JavaScript logging library and the RSS feeds.

I have a feeling I'll be releasing it with a "beta" moniker, although I haven't completely decided yet. If nothing else, I finally worked my way around the cross-domain scripting issue that wouldn't let it work if the Notes server that OpenLog was running on had a different hostname than the one that the web page was being served from (i.e. -- if the page was on http://apache.nsftools.com and OpenLog was on http://domino.nsftools.com, the Ajax POST wouldn't work).

Off the top of my head, that seems to almost cover it in broad strokes. However, I'm trying to figure out if I agree that those are general reasons for writing blogs or reading them. Seems to me that an additional category for writing a blog would be: self-ego gratification. Tom Haskins files that under "Distraction", but I think it might be a category unto itself (not that it matters, really).

If you're in or near the Atlanta area and you want to run in the Peachtree Road Race this year, make sure you buy an Atlanta Sunday paper this weekend. This is the weekend that the registration forms are in the newspaper. If you don't fill out the form and mail it by Monday (maybe Tuesday), you probably won't get a number.

The form says that photocopies are acceptable as valid registrations. That could potentially mean scanned copies of the form that are printed from your computer and filled out... I'm just saying...

[ permalink ] [ e-mail me ] [ ]
I went to see the movie 300 this past weekend and it was enjoyable. Pretty much what I expected after seeing the previews: it looked just like a movie version of a Frank Miller graphic novel. In a good way, of course.

Since I know essentially nothing about "real" ancient history, I decided to check out the Wikipedia entry on Sparta to get an overview and I noticed that it was locked and under dispute:

Hmm, what's that all about? So I clicked through to the Talk:Sparta page and man o' man, what a grand Edit War they've got going on there. It's absolutely hilarious to a disinterested outsider like me. At this point in time (here's the permalink to a version of the page from today, in case it goes away or gets drastically changed) the big dispute is over whether Sparta should have been called a "superpower" or not, although there seems to be a lot of personality clash going on to fuel the fire.

If you've got a whole lot of time (more time than me, because I just did a healthy skim of the page), there's a world of entertainment buried in that discussion. To an oddball sense of humor like mine, anyway. Start at the Sparta as a World Power section about 1/4 of the way down the page and keep on reading.

It's also interesting to see how disputes like this get resolved in an open forum like Wikipedia. On the one hand, there's the idealist mindset of Do Not Feed The Trolls (DNFT), hoping that trollish behavior will eventually just go away. On the other hand, this sort of thing can end up being a huge timesink for the people who are the real caretakers in such a situation, and it's not necessarily clear whether there's true trolling going on here or not. It might just be an honest-to-goodness (and very harsh) disagreement.

[ permalink ] [ e-mail me ] [ ]
I haven't had any time to play with the Notes 8 beta client yet, but I was reading through the Reviewer's Guide and saw this part on web service consumers in Notes 8:

In the examples they have, it looks like you just:

Looks nice and easy. I can't wait to try it out.

In yesterday's blog entry I mentioned that the Linux crowd had kind of taken over the Dell IdeaStorm site. Stephen Hood left a comment that:

Dell would have been better off not doing this if they aren't going to listen. Their excuse about having to pick one Linux distro... just damages their credibility further -- the opposite goal of this initiative... And then to just ignore the #2 request of installing openoffice was even worse.

So, does that make this a failed opportunity? Does that make IdeaStorm a bad idea, unless Dell chooses to follow all of the top requests on the list? (EDITOR'S NOTE: I know that's not exactly what Stephen was saying in his comment, but I'm making a point here)

No, absolutely not. This gives Dell an opportunity, and as I said in my previous post: don't fight the users, adapt the system. Here are some of the things that Dell can do in this situation:

If the site remains stale, it will fail (sorry for the rhyme there). Any site that allows that much user interaction will be used in unexpected ways, and if it doesn't grow and adapt it will become useless.

That's another lesson to learn when implementing all this social software stuff, I suppose: half the problem is getting people to use it, the other half is making sure it can evolve when people DO start using it. Evolve or die, and all that.

The Wikipatterns site has some good links on its Resources page too.

[ permalink ] [ e-mail me ] [ ]
I got a question last week about setting SOAP Headers when making web service calls from Lotus Notes using Stubby: the Web Services Slayer (a.k.a. -- the Lotus Notes Axis Stub Generator). I figured I should go ahead and document it here, if for no other reason than the fact that I can link back to it from the OpenNTF project site.

Here's the information: How to add SOAP Headers to a Stubby SOAP request

(NOTE: this was originally a big ol' long blog entry, but I moved it to its own page for ease of reference -- and so it wouldn't clutter up the blog so much.)

[ permalink ] [ e-mail me ] [ ]
I've noticed for the past few months that my laptop battery doesn't hold nearly as much charge as it used to. I can only get about an hour of use (or less) out of it anymore.

The Thinkpad Power Manager has a battery maintenance utility that performs a "Reset" on the battery -- charging it fully and then discharging it fully -- that's supposed to help, but it wasn't helping.

Yesterday I noticed that my battery light was flashing amber even though I was plugged in. I checked the Power Manager display, and it told me this:

Although there have been a couple of Lenovo battery recalls recently, mine wasn't one of them.

Thank goodness for my awesome Thinkpad maintenance plan though. The battery is still under warranty, and all I had to do was tell them what was going on and they said they'd ship out a new one as soon as it's in stock at the warehouse. No weird diagnostic programs to run, and no dropping off my laptop at a service center and having to wait for someone to assess the problem -- just a new battery and that's that.

That's the kind of service I was hoping to get when I paid a little extra for the Thinkpad brand in the first place. 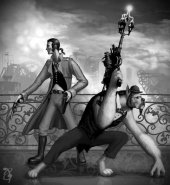 Via Dave Campbell (one of the funniest bloggers on my OPML), a guy named Eric Poulton is doing a mini-art series with a theme of Steampunk Star Wars.

I'm not even a Star Wars geek, and I find this to be seriously cool on some level I don't consciously grasp. Victorian-era Star Wars tomfoolery.

I honestly didn't know what the hell steampunk was before I saw these, although I've certainly seen/read the genre before. Yet more evidence of how unhip I am (in fact, my very use of the word "unhip" is probably some circular indication of unhipness -- surely there is some much newer, hipper word for that these days -- crap, I said "hip" again...).