[ permalink ] [ GoogleTrack ] [ e-mail me ] [ >> ]
In reaction to my last blog entry, several people seemed surprised to find out that I have an office (not a cubicle). I've worked out of cubes before, so I can sympathize with the plight of the cube-dweller. However, I have to admit that I've never had it quite as bad as this: 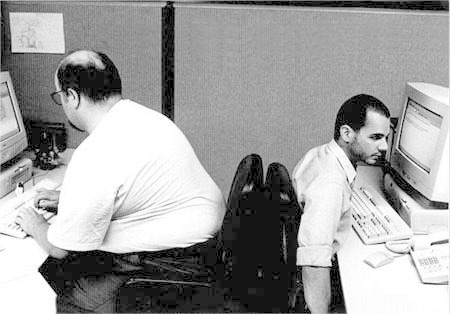 Just remember: things can always be worse. I wonder if this was an early experiment in Extreme Programming techniques?

[ permalink ] [ GoogleTrack ] [ e-mail me ] [ >> ]
People have a funny habit of walking into my office and resting their backend on everything except the guest chair that exists for that very purpose. Visitors will lean their butts against my doorknob, my credenza, or (worst of all) just plop right down and sit on the corner of my desk.

I never say anything about it, but I can't help cringing every time that happens. Personally, I really don't want to operate my doorknob after five people have stopped by to rub their rear against it, but I don't have much of a choice.

I'm thinking about hanging a sign up behind my desk (yes, that's a pun) that says:

Not sure if that would help, but it would make me feel better. Am I the only one who has these kinds of problems?

[ permalink ] [ GoogleTrack ] [ e-mail me ] [ >> ]
There was an interesting article in the MIT Technology Review magazine at the end of last year titled Digital Renaissance (registration required -- sorry about that). It talked about how kids are growing up today in a very media-rich environment, and parents should encourage their children to participate in this environment in order to understand and learn from it, rather than actively avoiding it (a concept that the author called "Media Literacy").

It's worth reading the whole article, but here's an excerpt to give you an idea of where it was going:

We would not regard our children to be literate if they could read and not write. We should similarly not feel that our children have developed basic media literacy if they can consume but not produce media. Creating media content can range from the traditional, such as writing stories, to the high-tech, such as programming original computer games. Just as reading and writing skills feed on each other, production and consumption skills for other media are also mutually reinforcing.

One of the problems that many adults have today is dealing with "information overload". Our brains can't effectively absorb and filter all the things that we're bombarded with on a daily basis. I wonder if that just won't be a problem for kids who are younger than about 10 right now. Maybe their minds will unconsciously adapt as they grow up in this mass of information, so that by the time they enter the workforce they won't even flinch at sorting through their inbox while they've got 12 web pages and 5 instant messaging windows on the screen.

That must be my problem staying focused at work. I probably just didn't watch enough TV growing up.

[ permalink ] [ GoogleTrack ] [ e-mail me ] [ >> ]
Here's something that seems like science fiction but has apparently been around for several years.

There's a technology called StereoLithography that allows you to create 3-D models of CAD drawings. You start with a vat of "liquid photocurable monomer" (which I think is like a liquid plastic) and a laser. When the liquid is hit by the laser, it solidifies at that exact point. As a result, the laser can be used to literally draw an object in the vat and produce a solid, 3-dimensional plastic model.

The best short description I found for the process was from a paper entitled Application Challenges to Computational Geometry:

The components of the stereolithography manufacturing process (e.g., in the system patented by 3D Systems of Sylmar, CA) consist of a vat of liquid photocurable monomer, a computer-controlled table on a stand that can be moved up and down in the vat and a laser above the vat that can shine on the surface of the liquid and can move in a horizontal plane. The system works as follows:

That's like something out of Star Trek. I'm trying figure out how to convince my boss that we need one of those for the Portal project I'm working on. Surely I could integrate that with WebSphere somehow...maybe there's a stereolithography portlet?

[ permalink ] [ GoogleTrack ] [ e-mail me ] [ >> ]
Okay, I'm probably going to blow my bandwidth budget by doing this, but it's almost the end of the month and I guess I have a few hundred megabytes to waste.

Here's an old Lotus Notes R5 television advertisement/promo/spot that I ran across recently (be careful, it's a 21 MB download -- it's a single mpg file, but I zipped it up so you don't try to stream it from my server):

Unzip the file, turn up the volume on your computer, and watch that baby a few times. You'll want to buy Notes all over again.

Now hop on over to the IBM site and watch some of the more recent TV spots. They're not bad, and some of them are kind of funny...but man, that old R5 commercial is just inspiring. I want more like that.

UPDATE: Ed says what I've got there is a "rally video". Whatever it's called, I like it.

[ permalink ] [ GoogleTrack ] [ e-mail me ] [ >> ]
I flew to and from from Atlanta this week, and I've got to say that airports are full of comedy if you just peek your head out from behind the newspaper every once in a while. For example, here are a few of the things I saw/heard in the airport this week:

I also think there was a guy standing at a urinal in the airport bathroom talking on his cellphone (using a hands-free headset, of course). I can't be sure though. Maybe he was talking to the wall. I didn't ask.

[ permalink ] [ GoogleTrack ] [ e-mail me ] [ >> ]
I'll be at a Websphere POT session for a few days (that's "Proof Of Technology", not the Bob Marley kind of pot session), so I may not be able to keep up with the old blog too often this week. Here are a couple of things you might be interested in before I go silent, though:

(As an aside -- Jerry, I tried to send you an e-mail, but it got bounced back saying that the message was blocked because it had the string "Bicha" in it. Unfortunately, "Bicha" is an integral part of the name "Robichaux", so...)

[ permalink ] [ GoogleTrack ] [ e-mail me ] [ >> ]
Oh gosh, I just looked at my tips RSS feed and realized I haven't posted a tip since January. Sorry 'bout that. Let me check the mailbag to see if there's anything interesting...

Ah, here's a letter from T. Duff in Oregon. He writes:

I recently realized that a Notes Database Replica ID is simply a representation of the date and time that the original replica of a database was created. The problem is, I can't figure out how to convert the Replica ID to a readable time/date. I've always been amazed by your programming skills -- can you help me out?

Sure "Puzzled", I think I can help you there. I added a little code to my API TIMEDATE Structures Tip that will make the conversion for you. Hope that helps.

(Editor's Note: the letter above was entirely fabricated. Any relation to a real "T. Duff", living or dead, is entirely coincidental.)

[ permalink ] [ GoogleTrack ] [ e-mail me ] [ >> ]
By the way, Paul Robichaux isn't a direct relation, but I imagine that our Louisiana connections have us as distant cousins somehow (my grandfather was a coonass from outside of LaFayette). We know of each other -- I've actually got a C++ book he co-authored way back in 1995, and I think he's written or contributed to a couple dozen other books since then -- but that's about it.

I say that just in case any of you were wondering after Ed's link to his recent commentary.

Too Much Focus (Monday, Mar 8)

[ permalink ] [ GoogleTrack ] [ e-mail me ] [ >> ]
I finally got around to seeing the movie Minority Report this past weekend. It was good high-tech sci-fi and also thought provoking (as are other Philip K. Dick stories that have become movies, like Blade Runner and Total Recall, and to a lesser extent Paycheck), but in the police station scenes I just couldn't stop thinking about the OK/Cancel take on the user interface. I'm sure that I completely missed many of the things that were going on in those shots just because I kept thinking, "Those guys were right. That would take more energy than an aerobics class."

Now, I'm not trying to say that the movie was ruined because of this, but it's funny how easy it is to get so focused on a single aspect of something that you can ignore lots of other things that are going on at the same time. Because I came into the movie looking for the un-usability of the computer interface, I stopped looking for things like subtleties and subplots during those scenes.

That's not too unlike other areas of life though. Think about the news. When you first realize that it's biased in certain directions (you can choose your own type of news here -- political, sports, computers, whatever), it's often hard to actually hear the news itself for a while, because all you're listening for is the bias. The informational value can fall by the wayside while you're trying to be clever enough to pick out the opinionated statements and complain about them.

As a developer, I have to watch out for this kind of mindset when I'm programming too. It's often so easy to get caught up in the details of the program (code elegance, internal complexities, cool interfaces) that you lose sight of the actual goal (producing a deliverable product that the customer can use). I've mentioned before that I struggle with that a lot, because I could spend months tweaking chunks of code that already work, just to try to make them look nicer to me.

I used to have a quote hanging over my computer that had been attributed to J.P. Morgan:

I don't want it perfect, I want it Thursday

I need to hang that back up, because that's something I need to keep reminding myself. Stop fussing so much over the little details, and focus on the whole job.

That's all for now. Have a good weekend.

[ permalink ] [ GoogleTrack ] [ e-mail me ] [ >> ]
I originally started writing this as part of a comment response to my last blog entry, but decided to break it off into an entry unto itself. I was trying to think of the ugliest LotusScript I could write, and here's what I came up with:

How To Spot A Fake Programmer (Tuesday, Mar 2)

[ permalink ] [ GoogleTrack ] [ e-mail me ] [ >> ]
Based on Mike's recent concerns that the availability of code and open-source programs is breeding an army of skript kiddies who are disguising themselves on the job market as real programmers, I decided to write out this simple guide for you. This can help you quickly determine whether someone you're talking to is actually a developer or not.

How to spot a fake programmer:

I'm sure there are other tells, but that should at least get you started.