The December 2010 Blog
send me a comment
Voiding The Warranty On My Wii (Friday, Dec 31)

[ permalink ] [ e-mail me ] [ ]
About a month ago, my Wii started making an infernal buzzing noise when there was a DVD in the slot. Which is pretty much... all the time.

Researching the problem on the Internet (because the Internet knows everything), I found instructions for taking my Wii apart and then bending things around to fix the buzzing problem.

If you have this problem and try to fix it yourself, know two things:

Another option is to buy Super Smash Brothers Brawl, apply the Smash Stack exploit, and then play my games from an external hard drive instead of using the game discs. That would bypass the buzzing altogether. I've already voided the warranty on my Wii by taking it apart, but I'm not sure if I'm ready to try to hack it yet...

[ permalink ] [ e-mail me ] [ ]
I've been using Lotus Symphony 3.0 to work on my Lotusphere presentation this week, and I made two small changes to the toolbar that have been a tremendous help:

#1: add the "Create Slide" button to the Editing toolbar. I have no idea why this wasn't there by default. 'Cause, you know, a lot of times when I do a presentation, I like to create new slides. 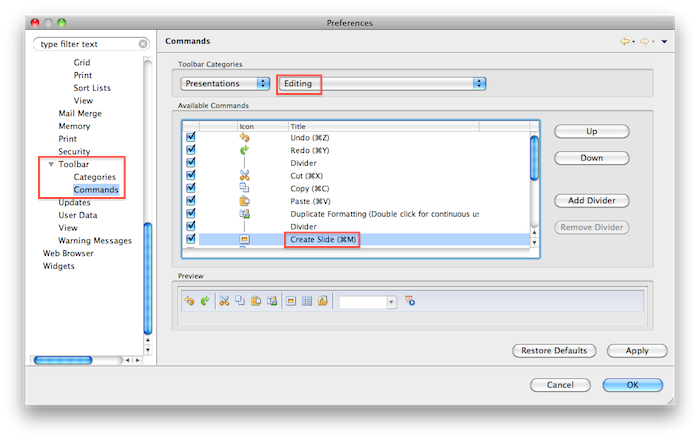 #2: add the "Select" button to the Drawing toolbar. This gets past a nasty feature/bug where if you click the "Text Box" toolbar button to create a new text box, you are unable to actually select anything on any slide until you completely restart Symphony (every time you click on something it creates a new text box). Clicking the "Select" button allows you to get back out of "Text Boxes Everywhere!" mode. 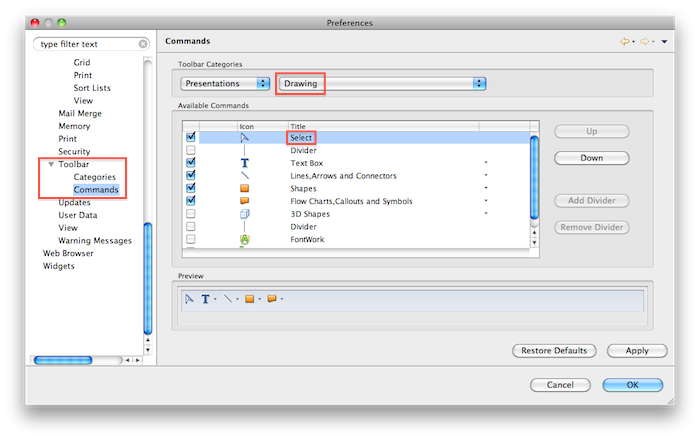 To modify your toolbar, just right-click the toolbar and select "Toolbar Preferences...". Screenshots are from my Mac, but should be similar in Windows.

[ permalink ] [ e-mail me ] [ ]
I realize that TV and movies often take liberties with their use of technology. There are many lists on the Internet (example 1, example 2) of technology mistakes in movies, so it's not all that original to jump up and say, "Har har, that alien spaceship is running Windows XP!" But those sorts of things amuse me nonetheless.

I was watching Nikita the other night, and in the Dark Matter episode they are trying to track down someone based on their IP address: 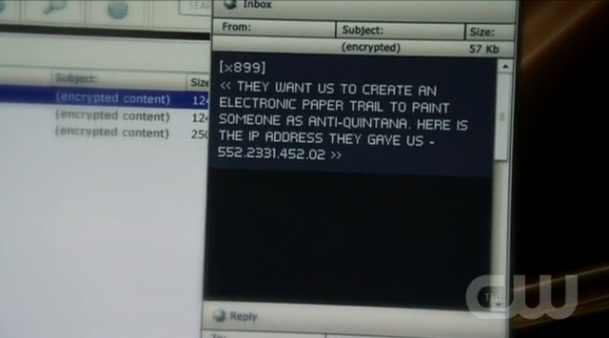 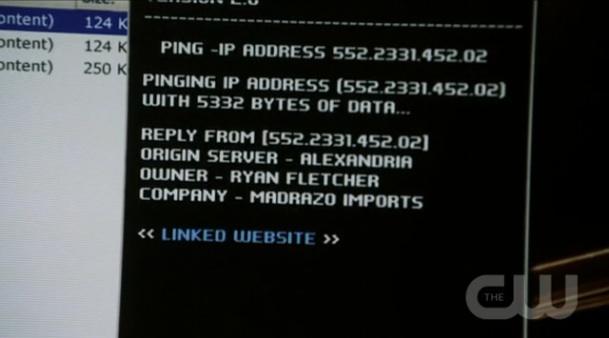 If you use the special "-ip address" switch and do it in all-caps, it comes back with a server name, a user name, a company name, and even a link to the website. Sweet!

And you know, as much as I'm making fun of it, I actually love when they do stuff like that. It makes the shows more fun to watch. I'd probably be disappointed (and a pretty bored) if the computers on TV worked exactly like they do in real life. Who wants to watch that?

[ permalink ] [ e-mail me ] [ ]
For the fourth consecutive year, I will be helping to judge the Teamstudio Spotlight Awards contest. You have until the end of December to enter; winners will be annouced and prizes will be awarded at Lotusphere.

This year there are two categories: Notes apps and Mobile apps. Prizes include the full suite of Teamstudio software tools for Notes/Domino, a 25-user version of Teamstudio Unplugged, and a $300 Amazon gift certificate.

If you have been developing some great applications at your company and you want to show them off, here's your chance. As with previous years, you do not have to show any source code or anything like that, just send in some screenshots and talk about what your apps do and how great they are. Think of how happy your boss will be if you come back from Lotusphere with a free suite of Teamstudio tools!

[ permalink ] [ e-mail me ] [ ]
When I was at the ILUG conference in Belfast last month, Rob Novak and I had the great fortune to employ Jamie Magee as our driver. Well, "employ" might not be the right word since he did it completely out of generousity, but it was certainly fortunate in the sense that I'm not a very good driver, and trying to navigate while staying on the left-hand side of the road would have been completely beyond my cognitive skills.

In any case, we all flew in to the Dublin airport, drove up to Belfast for the week, and then headed back down to Dublin to fly home.

But that's an oversimplification.

For the trip back, what we actually did was drive up to Giant's Causeway first, wander around there for a bit, and then drive down to Dublin. We were flying out the next morning, so we planned for a night in Dublin, staying at a hotel near the airport. Two other important elements to this story:

The Giant's Causeway diversion was a lot of fun, and we even accidentally discovered Dunseverick Castle on the way there. Any "accidental discoveries" in navigation would seem to support my theory of using a map of course, but I was trying to be sporting and enjoy myself so I only might have mentioned this a couple times. Look, I even took some pictures:

You will notice that the sun was approaching the horizon in that second picture.

About 10 minutes after we left Giant's Causeway (and shortly after I reminded Rob about our hotel rooms), we had this conversation:

Jamie: I don't remember being on this road on the way up here.
me: I wasn't going to say anything, but me either.
Rob: I'll check my Blackberry!

Jamie: Hey, do you guys want to eat dinner here or in Dublin?
me: I dunno. Surely there are restaurants near the hotel. Which hotel is it again?
Rob: [ignoring me] I'm gonna eat these vegetarian bacon chips!
Jamie: hahaha
me: sigh


Somehow we figured out roughly where we were, and roughly how to get back on the road to Dublin. I say "roughly" because this is a mapping approximation of the difference between the optimal route to Dublin and the route we actually took:

One of the many accidental discoveries we made along this series of diversions and darkened 2-lane roads was Bregagh Road near Gracehill. I think that's the road we were on anyway; if not, it's very similar. Here's a great picture of how that road looks in the daytime, taken by Peter Ellison and used with permission:

It looks like a beautiful road, and I would love to drive along and admire it in the light of day. However, at night it looks like this: 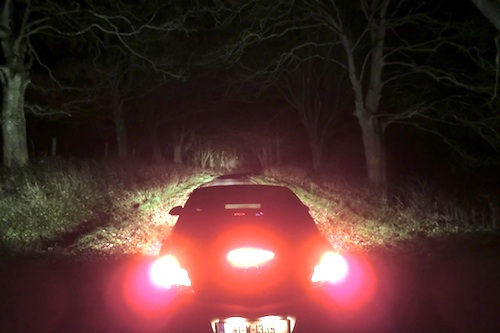 As I got out of the car in the drizzling rain to take this picture, I was seriously afraid that a headless horseman was going to gallop out of the trees and hurl a flaming pumpkin at me.

Then again, I figured I'd see the flaming pumkins blazing through the darkness, so at least maybe we'd get a good head start.

I suppose I really should have been afraid of Jamie and Rob driving off without me, laughing like maniacs, since they were discussing this very thing while I was out of the car. Not that I had a place to stay in Dublin or anything...

In the end it turned out okay. We found the M1 highway (several times), and one of the times we were on a major road Rob was even able to access the Internet and find us a hotel room. And Jamie only almost killed us once, when we turned the wrong way up a one-way street, and then corrected our course (avoiding an oncoming car) by finding a nice wide sidewalk to park on.

Even after all that, though, I think the strangest thing was going to dinner in downtown Dublin, walking out of the restaurant, and hearing a cover of "Country Road" by John Denver blasting on the speakers outside. Not your typical Irish melody. Does that keep the riff-raff from loitering outside? I don't know.

If I had the foresight and creativity to create a travel video like the one below, I would have used "Country Road" as my background music for this trip:

Causeways from Jessica Hische on Vimeo.