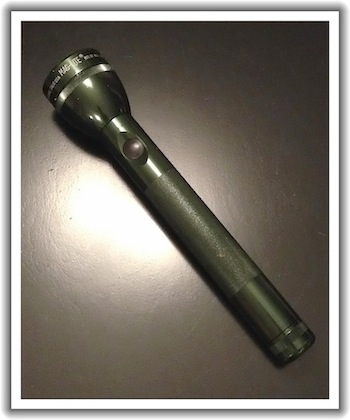 This is my Maglite.

It turned 20 years old today. I know that because I emailed the serial number to Maglite support and asked them when it was made. They look up the number in their database and give you the date of manufacture. 11/19/1993. That's my big guy's birthdate.

A few things about this. First, I don't have any other electronic devices anywhere near this old that are still in regular use. I do have some clothes that old that might get worn occasionally (don't judge), probably some tools, definitely some books, but nothing that plugs into the wall or uses batteries. I turned on the Maglite as recently as a few days ago.

TRIVIA: I still used the original bulb up until this year. The bulb lasted 19 years. Even more impressive, vowe suggested that I check the endcap for a spare when it burned out. Spare was there, and it works! After all this time I don't even have to buy a new bulb.

Second, I continue to use it despite the fact that I've got a few other flashlights that are much brighter. I have a little $4 Chinese flashlight that I use sometimes (when I can find it) that puts out a lot more light, but the old Maglite is always the first thing I go for. I've dropped it and gotten it wet and probably even used it as a hammer; it has kind of an Old Reliable feel to it. It would be part of my Zombie Apocalypse Kit if I had one.

Third, it has that intangible brand loyalty thing going on. If this thing ever [somehow] breaks, I will go right to the store and buy another one. Maybe two (cause I kinda like the MAG-TAC line). I'll probably give one to each of my kids when they move out of the house someday. And then they'll be like "Really Dad, a flashlight?" and I'll be all "It's not a flashlight, it's an heirloom!" and they'll talk about it in counseling 5 years later. Whatever, I'm doing it anyway.

It mostly comes down to quality. I can buy cheap throwaway flashlights that are brighter and newer, but they're just... disappointing. This thing has good heft, it takes a beating, and it lasts forever (in flashlight years). I'll always pay extra for that.

Any comparison or metaphor to software, technology, or life in general is an exercise left to the reader.