The September 2010 Blog
send me a comment
TriStateLUG and ILUG, Coming Your Way (Monday, Sep 27)

[ permalink ] [ e-mail me ] [ ]
Looking for a good place to learn about Lotus technologies and/or meet up with some Lotus peeps before the end of the year?

TriStateLUG (New York, USA) and ILUG (Belfast, Ireland) are coming up very soon. Both are free to attend, and as I write this I think there are still spaces available for both events. There are some great speakers signed up, and it should be a lot of fun. See you there!

[ permalink ] [ e-mail me ] [ ]
The kids were playing Twister with their friends this weekend, and on the board we have (kind of an old one... the newer ones might look different) was this:

The more I looked at the legs and arms in that graphic, the more I thought: "That's not just two people. There HAS to be a third." I mean, look at the angles!

It's a mystery, to be sure. Somewhere between the JFK second shooter conspiracy and the Kama Sutra.

[ permalink ] [ e-mail me ] [ ]
Every year, there is a theme or catch-phrase for Lotusphere: "Emergence", "Resonance", etc. We generally don't know exactly what the theme is in advance, but as a result of secret talks with my Lotus friends and a bit of reading between the lines, I think I've guessed what the Lotusphere 2011 theme will be.

Yes, I believe the theme will be Embiggen.

I'm sure many of you are thinking, "Yeah, sure, but that's just TOO obvious." That may be true, but I think it's a message that's far too important not to spread. Lotus Notes is truly the most embiggening collaborative software on the planet. I was told that it's the only software title in the "Embiggen" quadrant of the Gartner charts -- no one else is even close. The users in your company need to know how much they themselves can be embiggened by Lotus software, and how will they know unless you tell them?

So that's my guess. I hope the Lotusphere team at IBM doesn't end up having to run around and find a new theme now, because I've already designed my t-shirts.

[ permalink ] [ e-mail me ] [ ]
Kathy Brown wrote a blog post the other day about what she innocently thought was a stupid question: how do you recalculate fields in a Lotus Notes document? It's not that she didn't know how to do it in general (there are many different front-end/UI techniques); rather, she was trying to use NotesDocument.ComputeWithForm in a scheduled agent and it wasn't working.

Reading through the comments, there is no straightforward answer without either (A) duplicating code, or (B) rewriting all your forms and form fields to use code from shared script libraries, which is actually a useful thing to do but it's total overkill if your forms have a lot of fields and you just want to recalculate one or two things.

Unfortunately, when ComputeWithForm fails -- which could be because of a field on the form that you care nothing about, but has a rogue validation formula or something -- it doesn't tell you what went wrong. It just fails and your document doesn't get updated.

Turns out that the C-API code that runs the ComputeWithForm process actually can tell you what the problem fields are on the form. That information isn't available in LotusScript or Java, but you can access it at a lower level. For example: 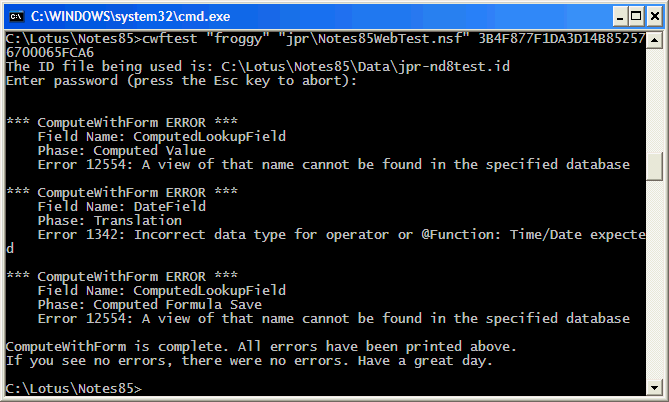 That's right, I wrote a command line tool. It's been a while. You can download the cwftest.zip file and try it out yourself. It's Windows-only, and it doesn't have many options, and it only processes a single doc in a single database at a time. But it might help you troubleshoot hitherto unknown errors.

Oh, and make sure you've saved all your work in the Notes client before you start trying to use the program. Just in case something crazy happens and it crashes your client (works on my machine, of course).

[ permalink ] [ e-mail me ] [ ]
Brand new free Lotus Notes sidebar app from SNAPPS: a character map that allows you to easily see special characters and insert them into arbitrary text fields: 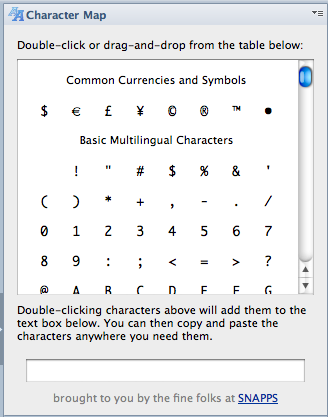 If you double-click a character it will be added to the text box at the bottom of the app, so you can copy-and-paste from there -- characters in the text box are persistent across restarts of the Notes client too, making it a good place to store "favorite" characters. You can also drag-and-drop characters directly into editable text or rich-text fields.

As an added bonus, when you hover over a character you get the Unicode hex value, the integer value, and the glyph name; this is handy for developers when you're looking for ASCII or Unicode values.

Just point your browser to the SNAPPS Sidebar Widget Catalog, click the Character Map widget, and follow the installation instructions.

And hey, Lotus Quickr admins: while you're on the SNAPPS templates site be sure to check out the new SNAPP-On modules for Quickr Domino!