The September 2008 Blog
send me a comment
End Of September, Did You Donate? (Tuesday, Sep 30)

[ permalink ] [ e-mail me ] [ ]
It's the end of September, did you remember to donate to charity via Paul Mooney's website?

While many of us are complaining about high gas prices, there are still plenty of people in the world who don't have a reliable water supply. Take a look at the video link from Paul's blog entry and see what you can do.

[ permalink ] [ e-mail me ] [ ]
Two weeks on the road, and I'm back at home settling in. I'm actually supposed to be home for the entire month of October (minus a quick family weekend trip), which will be plenty of time for everyone here to get sick of me again and start asking when my next trip is.

Collaboration University was a huge success. Lots of smart people, the developer workshops were overflowing, and I got a few questions that I didn't quite know the answer to but could easily point the questioners to the right person to get an answer from (it's nice to be surrounded by experts like that). I'm not sure that either location was "better" than the other -- the Hyatt Center in Chicago has a beautiful office space designed by a firm who has also done some of the Apple Store interiors, and the IBM South Bank building is right off the Thames and has a great patio area where you can walk outside and watch the people and the river (during breaks, of course). I liked both places.

The London event was immediately followed by UKLUG, where Warren and company put on what appeared to be an effortless conference. I know that's not true, since a tremendous amount of effort and planning goes on, but the event itself just seemed to go very smoothly. Warren himself did an amazing job of holding together, considering the fact that he was in bed with a horrible head cold just a day before UKLUG, yet looked chipper and happy on the morning of (apparently DayNurse and NightNurse contain a pinch of magic).

A few random remembrances from the past couple weeks:

And now, back to work.

[ permalink ] [ e-mail me ] [ ]
I'm at Collaboration University Chicago this week (got a nice CU logo shirt and everything), and we just finished up Day 1 yesterday. The keynote speaker was retired US Marines Colonel Ed Hackett, a former fighter pilot as well as a person who has been very involved with both the Pentagon and the Joint Chiefs. It was an interesting keynote speech, because his take on collaboration is quite different than the traditional IT take on things.

Among other things, he headed up a group of fighter pilots on an aircraft carrier. Not only is there a tremendous amount of communication going on to make everything go right, but if the communication breaks down, someone could actually die. Now THAT'S an environment where the quality of networking and communication channels are super important -- none of this mamsy pamsy "oh no, Twitter is down again" social stuff. 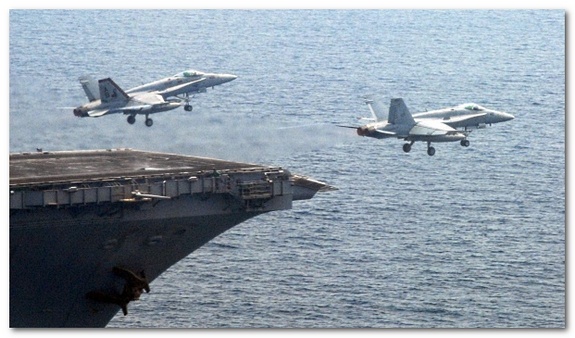 It's amazing how many people are involved with the process of launching and landing a jet on an aircraft carrier. It makes sense if you think about it, I just never thought about it before. I always just saw the pilot, the guy on the runway making all the hand signals, and other people running around trying to get out of the way. In reality it's a huge coordinated effort between everyone out there. Everyone's communicating and keeping in sync.

And that's just the takeoff and landing. The flying itself isn't just one guy out there solo either. All the pilots are talking to each other, and there's all sorts of information going back and forth between the plane and the ground crew. Plus, with all the chatter going on, there are ways to increase the priority of extremely important messages, so those get heard over the noise of the other communication.

Again, very interesting, and a cool take on what we normally think of as collaboration.