The July 2006 Blog
send me a comment
Wherefore Art Thou, nsftools.com? (Monday, Jul 31) 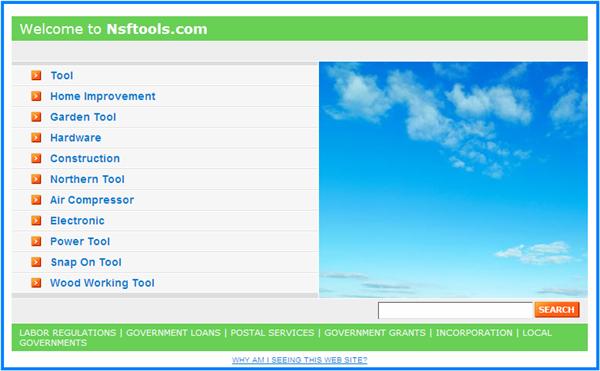 Unfortunately, on this past Saturday morning, that's exactly the page you got when you visited nsftools.com. I first got a call that morning from Bruce -- yes Bruce, who was getting married that afternoon! -- telling me that the domain wasn't resolving properly. Then my friend Darren, and also some on-the-ball blog entries by Julien and Mikkel. Thanks guys!

Well, the DNS record had my domain registration expiring on July 28, so at midnight on Friday the DNS record expired. I had my domain maintenance set up to be managed by my hosting provider last year, and they were supposed to do all the renewals for me. Apparently they didn't.

Luckily the registrar they use has a "redemption period" where they hold expired domains for 30 days before they delete them from the registrar database. During that time, you can actually reactivate the domain at no extra charge (other than the normal annual fee). And so my domain was reactivated, and at some point on Sunday my site started resolving properly again.

I really wish that there was a little more explanation/apology from my hosting provider, other than closing my trouble ticket with a message of "The domain should be resolving properly now", but at least everything's working again. I would have really freaked out if the domain was gone for good...

I still think it's pretty strange that the registrar replaced my site with that weird "other page" in the interim (instead of, say, an "expired domain" message), but at least it made it very obvious that something was up.

The Novell edition of OpenOffice.org 2.0 provides support for spreadsheets that include Visual Basic for Application (VBA) macros, removing one of the largest barriers to enterprise adoption.

An LWN article from March mentions that:

Novell has also added support for Microsoft visual basic macros in OpenOffice.org 2.0. Support for macros has been one of the big stumbling blocks for those looking to exchange documents with heavy Office users. VBA macro support is part of the ooo-build fork, but has not yet found its way into the OpenOffice.org mainline. Novell's work in integrating this support should help to push this feature forward for all users - once Novell releases the code.

So it looks like it may be SUSE-only for now. I'll have to see if it's in the OpenSUSE version as well.

Hopefully having support for VBA macros wouldn't open the doors to scripting attacks too...

The code-name Hannover refers to the Notes client. The Domino server that will be released with Hannover is code-named "Domino Next".

I couldn't get that "Domino Next" thing straight. Glad to know where it stands. Also, he says:

Currently, there is no official number assigned to Hannover or Domino Next because any numbering and naming has to clear lengthy legal hurdles. But, between you and me, the number is likely to be somewhere between 7.99 and 8.01.

LOL. Too bad he couldn't have been more specific about the numbering...

[ permalink ] [ GoogleTrack ] [ e-mail me ] [ >> ]
Getting ready to test out the new Notes Client on Linux -- Bruce and I talked about this on the Taking Notes podcast, episode 25 if you need a quick overview. As Chris Whisonant and Wild Bill have noticed, it's already available for download on the Passport site (HINT: search for C93D1NA).

In anticipation of testing it out, I'm creating some new VMWare virtual machines on my laptop. The current supported Linux distro is Red Hat Enterprise Linux v4 update 3 (RHEL4), with SUSE Linux for Enterprise Desktops 10 (SLED10) to follow shortly. However, I'm only testing and I don't feel like purchasing those distros just for a little test virtual machine right now, so I downloaded:

I tend to like SUSE, and I know that IBM has a special relationship with them, so I'd probably prefer SLED over RHEL given the choice of the two. However, Warren Elsmore also points us to a wiki page that talks about installing the new Notes client on Debian, so maybe my good old Ubuntu machine will be the first to go. We'll see... we'll see...

p.s. -- you really should use a bit torrent client (like Azureus) to download those big 'ol install DVDs for CentOS and OpenSUSE, if your network permits it. And if you do, don't forget to be a good torrent citizen and leave your client open when you're done for other people to download from.
;-)

Here's some code I just rediscovered -- it's a database I was fooling around with a year ago (almost exactly a year, based on the dates). At the time I sent it to jonvon for him to take a look at, and haven't really thought about it since.

I'm pretty sure I had some kind of grand plans for the code, but I don't know what they would be now, and I've got too many other code projects going on to be distracted by yet another...

Anyway, the database is called CodeThief, and it has 2 agents in it:

Here's a screenshot, for the text-impaired: 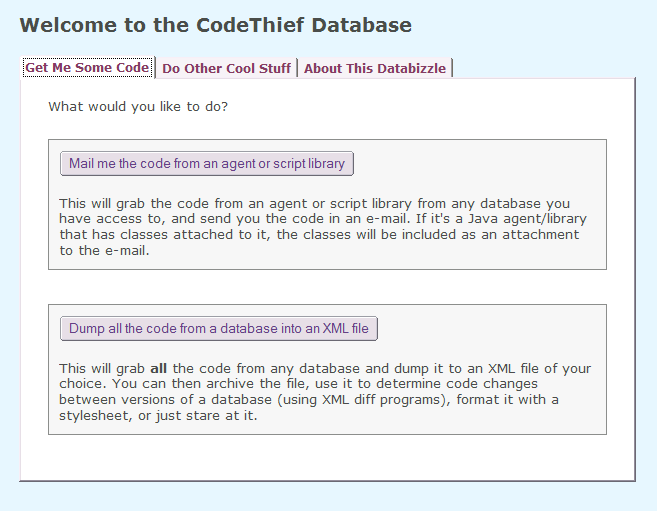 If I remember correctly, I actually wrote the original code because I wanted an easy way to extract the attachments from a Java agent. It's kind of annoying that you can attach files to a Java agent or script library, but there doesn't seem like any good way to detach them if you want to. The "Mail Me An Agent" agent will do that for you.

After I got that agent figured out, I think the database dump was just me playing with XSL. Or is it XSLT? I can never keep those two acronyms straight...

If you're interested in this sort of stuff, I highly recommend you take a look at Mikkel Heisterberg's project called LotusScript.doc. More DXL goodness there, and it's just a neat application to play with.

Oh, and a couple months ago Mac Guidera finally did post the Domino Ajax Database that he talked about in his Lotusphere session on DXL. Well, it's not quite the same database, but it's another "fun with DXL and XSL" example anyway. I've been meaning to mention it for a while. Sorry 'bout that Mac! Thanks for putting it out there!

UPDATE: Stephan Wissel followed up with a stylesheet that outputs all the hide-when formulas in a database. That could be pretty useful.

[ permalink ] [ GoogleTrack ] [ e-mail me ] [ >> ]
My wife and I have some cheap digital watches that we bought at Target, for use at the pool, the beach, and while exercising. I think they cost about $5 each, so they're essentially disposable as far as watches go, which is nice because you never worry about breaking or losing them. They're supposedly "water resistant" to 30 meters too, although I don't think I'd ever try to test that measurement outside of a few splashes in the ocean.

The problem is, my watch somehow got set to broadcast an hourly "chime" at the top of each hour. The "chime" is actually 2 blaring BEEPs that you can hear from across the house. For a few days, I had to keep the watch in my sock drawer to keep it from waking me up all night, because I couldn't find the instructions and I couldn't figure out any way to turn the damn thing off.

I scoured the watch for any kind of identifying marks that could be used in a Google search for instructions ("cheap digital watch Target" wasn't bringing back any meaningful results on Google), and I was on the verge of either throwing the damn thing away or buying a second one just so I could have instructions for the thing.

And then I found the instructions for my wife's watch, which were also relevant to mine. So I was finally able to turn the friggin' hourly alarm off!

As an act of good Google karma, I scanned the instructions and uploaded them here, for any other poor souls who have this annoying problem. For anyone who's interested, here are the instructions for the cheap-ass ProSpirit digital watches that they sell at Target.

BTW, I had no idea it was called a "ProSpirit" watch until I found the directions -- nothing on my watch said anything of the sort. I'm sure a Google search for "ProSpirit watch" would prove much more fruitful than "cheap digital watch Target". The watch company is apparently called the "Advance Watch Company".

Oh, and for anyone who wants the short answer to how to turn the hourly chime off, you have to hold the top left button down, and then press the bottom left button once. Ah, sweet silence...

[ permalink ] [ GoogleTrack ] [ e-mail me ] [ >> ]
Sometimes these blog entries just write themselves. In the comments of my last entry on using and parsing 'show dir -xml', Wolfgang Haderlein wrote:

thank you, great function. I played a little bit: Do you know why show database -xml is not working (I also posted on notes.net)? This would be helpful to get the number of documents from the mail.boxes and build a web page for all servers of a domain. I know domino admin client can do it but would be very helpful for a monitoring group or first level support.

By the time I saw this, Thomas Gumz himself had already responded:

However, the similar (and more powerful) >SHOW DIR -xml is working fine and gives you all sorts of information about every database on the server. It does it directly from the server's dbcache, so it's extremely fast and efficient, too.

Also, to get the number of waiting docs in the mailboxes, consider using >SHOW SERVER -XML, which shows the number of mailboxes and pending/dead mails, or use >SHOW STAT MAIL -XML for all mail-specific stats... it's all there!

For folks interested in this stuff I'd recommend to dig into the webadmin.ntf template, which uses the -xml stuff for all sorts of other things...

PS1: All that -XML support is available since Domino 6.0.

Happy parsing everyone!
Thomas, IBM (XML-ifier of Domino since R6 ;-)

Sounds like that still may not provide quite the data that Wolfgang was looking for (see his follow-up comment), but... WOW, that's some great information. And from the man himself too, which is much better than me having to take a SWAG* at it.

The tip about digging into the webadmin.ntf template is a good one also. There's some very interesting code in there...