The April 2010 Blog
send me a comment
Reading Books on the iPad (Tuesday, Apr 20)

[ permalink ] [ e-mail me ] [ ]
I've had a Kindle for about a year and a half, and I've read somewhere between 30 and 40 books on it. It's a first gen device, although my wife has a current model so I've seen the new ones too. Despite my deep Kindle affections, I wanted to use my new iPad as a book reader for a while to see how I liked it. Here's what I found so far.

Reading outside
As you might have heard (or surmised), the shiny backlit iPad screen does not perform anywhere near as well as the Kindle e-ink screen in bright sunlight. Here's a picture I shot yesterday at 1:00 in the afternoon in the brightest sunlight I could find: 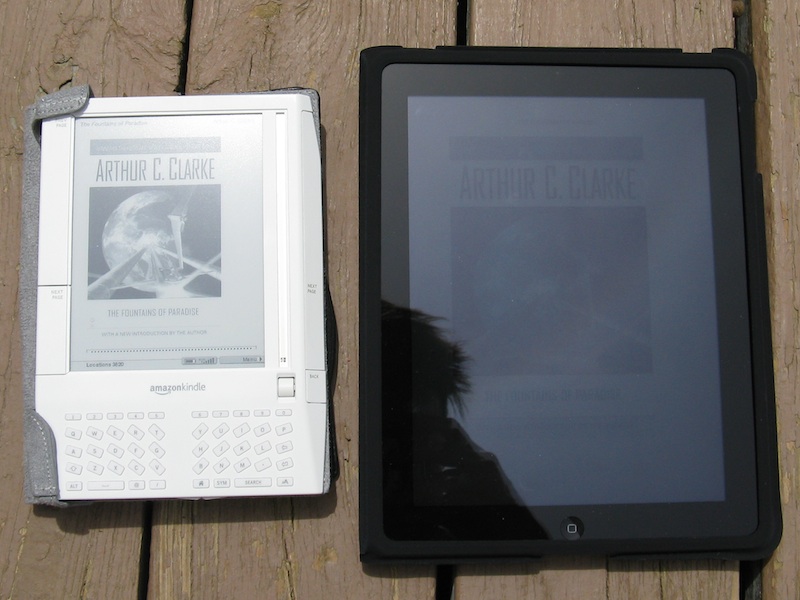 Not only can you barely even tell that the iPad is on, but you can see the glare from me taking a picture. So if you're considering both devices and you read outside a lot, go no further. Your decision has been made. However...

Reading inside
...I do pretty close to 100% of my reading inside -- sofa, bed, hotel, airplane, etc. For me, the outdoor reading thing is not even an issue. And don't confuse "outside" with "natural light" either. On Sunday I was reading on my iPad on an airplane at noon with all the windows open and cabin lights on, no problem.

There's a concern about the iPad causing more eye strain because of the backlit screen, but honestly I haven't noticed it. I've only read one full book so far though, so maybe it's a delayed effect? I don't know.

In low-light or no-light situations, the backlight is an obvious bonus for the iPad. In fact, you can adjust screen brightness on both the iBooks app and the Kindle app for iPad, and the Kindle app even lets you switch to white text on black background (or brown text on sepia, which seems kind of muddy/dirty to me). Granted, I could also spend $5 on a portable LED book light for my Kindle, so that might not be a huge issue either.

Screen size
I thought that the larger iPad screen would be more of a big deal to me than it actually is. Turns out that I'm pretty neutral on the screen size difference between Kindle and iPad. I've never had a problem with "pace" on my Kindle (turning pages too often), so the size difference really didn't matter.

Weight
I also thought that the heavier weight of the iPad would bother me, but it doesn't. At least, not after I got the iPad cover. Holding the iPad for reading in its "bare" form was much less comfortable than holding it with the cover for some reason. I have no idea why. In any case, both the Kindle and the iPad are equally easy to hold and use.

Battery life
My Kindle can go for many weeks without requiring a charge, as long as I keep the wireless turned off. While the iPad battery won't last nearly that long, it has a pretty considerable battery life too, at least long enough that it's not really an issue.

Controls
The demonstrations of book-reading on an iPad always show someone swiping the screen from right-to-left to turn a page. While this makes for a cool demo, it seemed to me to be a very jarring way to read an e-book. Kind of like that old OK/Cancel cartoon about Minority Report and how the stand-up-full-arm-swipe computer interface in the movie looks really cool but would be completely exhausting after 5 minutes.

Luckily, both the iBooks app and the Kindle app on iPad allow you to simply tap the left or right edge of the screen to turn to the next or previous page. This is very simple and satisfying, but it's also actually a situation where the physical Kindle device is a little better for me. You see, I spend most of my time reading with the book straight ahead of me, but sometimes I like to roll onto my side and lay the book down, which effectively gives me only one arm/hand to use for page turning (the other one is supporting me or tucked under my head). With a Kindle, it doesn't matter which arm is free because there's a "Next" button on both the left and the right sides of the device. As far as I can tell, with my iPad I have to either tap the right side of my screen or do a quick mini-swipe on the left side to go to the next page. If I only have my left hand free, the left-side-mini-swipe motion often gets interpreted as a "previous page" tap, which is annoying.

Of course, maybe I could build an iPad-equivalent of the xkcd Kindle stand and solve the problem myself. Or maybe a future version of the iBooks/Kindle app on the iPad will have a left-side "Next" button, so this will be fixed with a software upgrade, kinda like the brakes on a Toyota.

iBooks versus Kindle app
I've also been testing the iBooks app versus the Kindle app on the iPad: 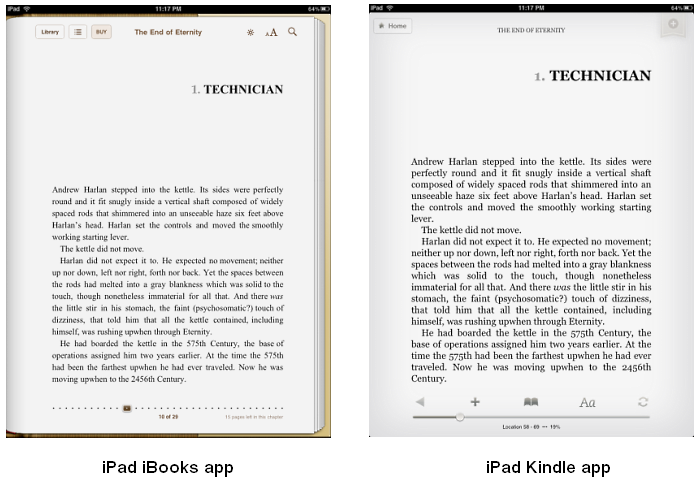 The two apps are essentially equivalent in terms of usability and features -- you can adjust fonts, change screen brightness, etc. The screenshots above look a little blurry because I resized them down, but the text and fonts are quite readable. The iBooks app does have one feature that I've been wanting on my Kindle since the day I bought it though: number of pages until the end of a chapter:

The iBookstore also has the same "Sample a book" feature that Amazon does, so you can download the first chapter or so of a book for free to see if you like it. However, iBooks currently has a much more direct interface with the iBookstore than the Kindle app has with Amazon -- in fact, you currently have to use Safari to find and buy a book for the Kindle app and then switch back to the app to download it -- but that's another thing that might change with a software upgrade later on.

The price of books
The last thing I'll discuss is the price of books. Earlier in the year there was a lot of speculation that eBook prices were going to go up, and that does seem to have happened. Going through my Kindle purchases of the last year or so and comparing the price I paid to the current Amazon list price, maybe around 1/4 to 1/2 of the books I bought have gone up. Mostly it was books I paid $6.39 for that have gone up to $7.99 to match the paperback price. There are also a lot of ebooks selling for more than $9.99 now, which I don't remember seeing at all last year other than a few specialty books.

In terms of iBookstore price versus Amazon price, I think the story is that I'll have to shop both stores. Ars technica talked about "agency pricing" and how that affects prices in both places (and on other readers like Sony and Nook), so I'd guess that best-sellers will probably mostly be the same. Older books are still a toss-up as I've been looking for titles though. For example, right now "Atlas Shrugged" sells for $9.99 as a Kindle book, but it's a whopping $27.99 in the iBookstore. Not sure who's setting the prices there.

Both bookstores have an equivalent selection of free Project Gutenberg books too, if you're into those.

Also, please refrain from sending me e-mails or leaving comments or otherwise carrying on about DRM and "book lending" and whatnot. That's not what we're talking about here. You can have that discussion somewhere else.

Conclusion(?)
I still have no conclusion, I suppose. I like my Kindle and I like my iPad. The iPad is slightly more satisfying to read with right now, but that could be a reality-distortion thing caused by having a shiny new device.

I'll probably be much more likely to buy books from Amazon than from the iBookstore simply because I can sync pages between the Kindle device, the Kindle app on my iPad, and the Kindle app on my iPhone, so I can always read with whatever device is handy. When I travel, I'll probably leave the Kindle at home and read on my iPad just so I have one less device to carry. Around the house? It'll be a toss up. I haven't decided yet, and in some ways I don't really have to. I can use whatever's handy.