[ permalink ] [ e-mail me ] [ ]
I've been playing around with a Notes 8 Sidebar app recently, and it looked like it was getting an error on my 8.5 client on the Mac.

If you start the Eclipse-based Notes 8.x Standard client with the '-RPARAMS -console' arguments (as described in Technote 1304955) then it launches with the OSGi console active. This allows you to -- among other things -- see any System.out and System.err messages that get generated in the background. The problem was, I couldn't figure out how to add command line arguments to an application launch icon on my Mac.

After some digging and searching, I found that I needed to launch Notes by opening a Terminal window and typing the following at the prompt:

This launches the Notes client with the OSGi console running in the Terminal window like so: 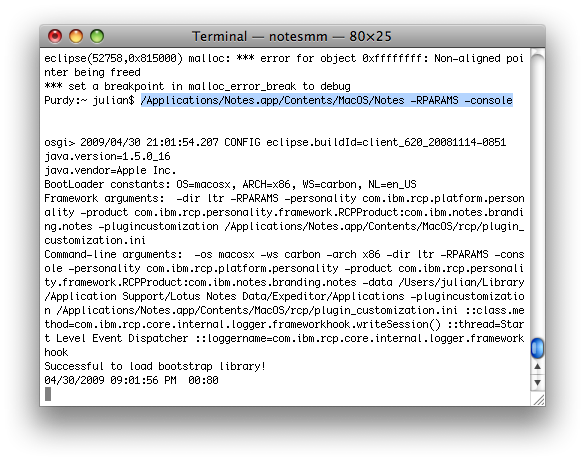 If you're a plugin developer, you can even add functionality to your app so it accepts commands from the console. Bob Balfes and Mikkel Heisterberg have discussed this before, and there's also an introductory article on developerWorks called Explore Eclipse's OSGi console.

[ permalink ] [ e-mail me ] [ ]
Just a reminder that Collaboration University registrations will open soon, so if you need to talk to your boss about getting travel approval and whatnot you should do it now -- early registration is cheaper. Rob just blogged about guest speakers and he also set up an @CollabU Twitter account you can follow.

We're in the process of putting together the session list, so if you have any requests for topics you'd like to have covered please let us know either by Twitter or by old fashioned e-mail. Even though the event is about IBM collaboration products in general (Quickr, Sametime, Connections, etc.), it's really good to know what kind of focus people want. How to install? How to customize? How to integrate? What will provide the most business value? Keep in mind that this tends to be a pretty technical, hands-on kind of show.

Also on the subject of conferences, Chris Miller just opened registration for IamLUG in St. Louis and I think there are still a few slots left for UKLUG in Edinburgh.

[ permalink ] [ e-mail me ] [ ]
Last week I was up in Boston for the VIEW's Lotus Developer Conference. It was actually the 10th anniversary of VIEW Lotus conferences and it's still going strong. Excellent technical content and a really fun bunch of speakers, as usual.

One of the sessions I got to attend (I only gave 4 presentations this time around so I had a little freedom) was an update to one that I missed at Lotusphere: Maureen Leland's Domino Designer 8.5 And Beyond. She demoed the brand new LotusScript and Java editors in DDE 8.5.1 -- full native LotusScript class browser with type-ahead! "Real" Eclipse Java editor! Huzzah! -- and also mentioned that they're very close to XPages in the Notes client, although I can't remember if they've committed to that for 8.5.1 or not. No news on whether the Java UI classes that have been unearthed are going to be available for use (extremely doubtful).

I do have to say that from everything I've seen at conferences as well as NDA beta previews that I can't talk about, it really seems like 8.5.1 is going to be a very significant point release. Lots of features and improvements. There's no official release date yet, but it's supposed to be sometime this year.