Last week at the IBM Connect 2017 conference, I received the IBM Champion Lifetime Achievement award. Anyone who is not familiar with the IBM Champion program might not have a good sense of what this award means, but it's really a tremendous honor. 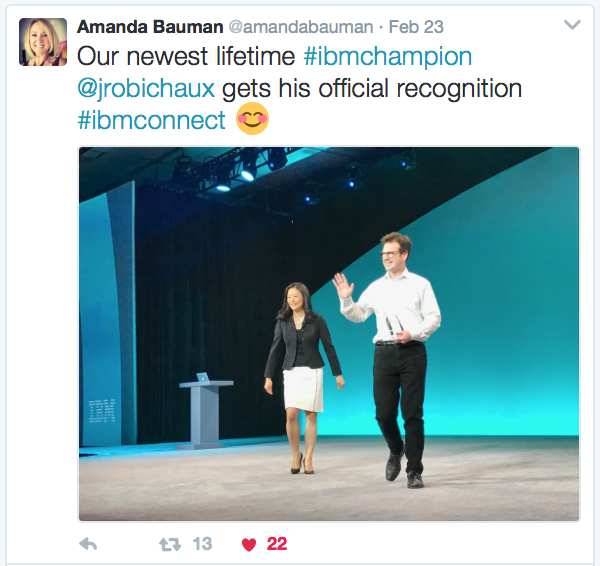 Gab Davis and Theo Heselmans are the original two Lifetime Champions, and to be in a select group with them is so flattering. They are both so incredibly smart, helpful, and professional that last year when they were named the first Lifetime Champions ever absolutely no one was surprised. Who else would it have been? They are the top of the class. When I found out I was #3, I was blown away.

I even got to go on stage at the opening AND closing session at the Connect conference! How cool is that!?!

Really, it was a huge (and terrifying) thing for me.

I have so many thank you's that I can't even begin to list everyone, but I do know where to start: Amanda Bauman and Libby Ingrassia run a spectacular program for the IBM Champions on the Social Business side of the house. They work their tails off promoting the program and giving the people in it visibility, both inside and outside of IBM. They make it mean something to be a Champion, it's not just an empty title. They give us a collective voice, they put our names and faces on giant screens at conferences, and they give us access to information and people that we would never have access to otherwise. 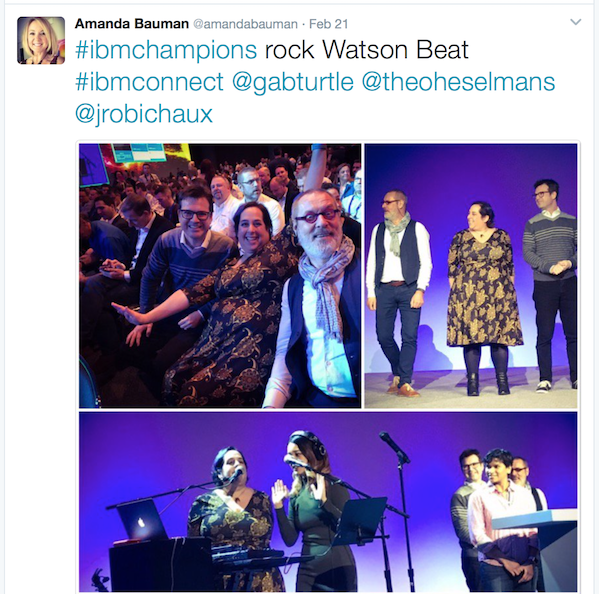 A giant group thank you to ALL the people who congratulated me on Twitter and Facebook. Within an hour of receiving the Lifetime Champ award on Tuesday, I had to stop "liking" all the congratulatory messages on social media because I simply could not keep up -- and it started feeling like bragging because I was filling my timeline up with "likes". But it literally went on all week. There were way over a hundred messages, likes, and retweets. I was just... I couldn't believe it. I still can't.

Thank you to the folks who arranged it so that I received the official award in front of the entire audience at the Closing Session -- announced and presented by Inhi Cho Suh! That was scary and amazing.

Thank you to the people who spent so much time and effort writing really flattering articles and blog entries about the whole thing. The IBM article even appeared on the IBM Connect landing page, which was so cool.

And thanks to all the people who gave me handshakes, hugs, and fist-bumps when they saw me in person at the conference. I have no idea how many people that was but it was a lot, including some people I didn't even know.

I hope this doesn't seem like bragging, because it's really not. I mean, I am super proud of getting this award, but I am just so horrible at showing my appreciation that it's hard for me to find the right way to say things sometimes. So... thanks!