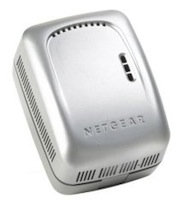 I've used a couple of Netgear powerline ethernet adapters for about 5 years, to connect an old desktop computer in a particular corner of my house that seems to be a wireless Internet black hole. They've always worked flawlessly: I just plug them in the electrical outlets and I suddenly have wired network connections right there on the wall. No configuration, no other steps. It's like magic.

The power supply on that old desktop computer failed a month or two ago and, being too cheap to buy a whole new computer, I spent 30 bucks on a new PSU and I was back in business. Except suddenly the powerline ethernet stuff stopped working. All the lights lit up like they were supposed to, but I couldn't get an Internet connection. So I started troubleshooting.

Step 1: Make sure what you think is broken is really broken
The worst thing you can do when you're troubleshooting a problem is to assume too many things. I initially assumed that the thunderstorm we had recently must have blown out the Netgear adapters, since I knew they worked a few weeks before and the storm caused a few brownouts and reset the clocks in the middle of the night.

Then again, it could be that whatever blew out the PSU on the old computer also messed up the network plug on that machine too (it's on the motherboard). So I tried connecting with a laptop and a couple of new cables, and still no Internet. All signs point to bad powerline adapters, but then again...

Step 2: What changed?
There was one other thing to think about before I jumped to the "broken adapter" conclusion. What changed? Well, I got a new power supply, didn't I? I've heard some people say that they have trouble with powerline ethernet around big televisions and home entertainment equipment, so I thought maybe that new power supply was causing some sort of interference. 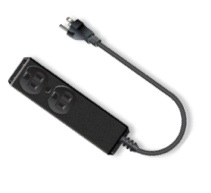 Yes, I am using a surge protector between the computer and the outlet, but what I think I really need is a good noise filter. The thing is, I think of those as protecting the device from electrical noise, not keeping a noisy device from affecting other electronics. I don't know, maybe it works both ways. Apparently some power supplies have the filters built in, but I guess mine doesn't (or it doesn't work).

There are a few devices that look like they're specially made for this problem though. For example, the Smarthome FilterLinc and the Plaster Networks IX2 Isolator seem to fit the bill. Even though I ultimately need to replace that old, noisy computer, I'll probably go ahead and buy one of those and see if it makes a difference. Now I'm just plain curious.

As a sidenote, Plaster Networks also has some nice management and diagnostic features that come with their adapters, so if I ever replace the Netgear units I'll probably buy a set of those. Graphs are cool.

One of the "speakers" at this year's Lotusphere Closing General Session was IBM Watson, the supercomputer that will be playing Jeopardy against two former Jeopardy champions later this month (February 14, 15, and 16: set your DVR now).

In a surprising bit of coincidence, I was reading the February edition of Delta Sky magazine on the flight home last night, and saw that there will also be a special on Nova on February 9th about Watson and the Jeopardy challenge.

But anyway, there were a few especially interesting aspects of the Watson demo to me. First is how well it tied in to the "Social Business" theme of Lotusphere this year.

When I think of a supercomputer playing Jeopardy against a couple of "meatbags" (the term used by host Todd Alan Crain to offhandedly refer to the human contestants), I don't really associate that with social business, outside of the fact that a game show could be considered a somewhat social activity, and it's certainly a business for TV stations and for Alex Trebek.

But when Dr. Eric W. Brown, one of the DeepQA researchers on the Watson project, was talking about the challenges and considerations around building a system like this, he pointed out that the end-game is certainly not just building a Jeopardy playing computer. It's about natural language processing.

This is much more difficult than building a chess playing computer like Deep Blue, because of the analysis involved and the connections and inferences that need to be made in order to interpret a statement and then figure out an appropriate answer. However, in a "social business" world, that kind of technology is exactly what we need -- not only for analysis of social data, but for things like the medical industry where you are running tests and making diagnoses based on people rather than raw numbers.

Another social surprise came as I was tweeting during the CGS, and I asked this question:

I immediately got answers from Kathy Mandelstein and @SmarterPlanet (thanks, BTW!), but I also got this response direct from the source:

Now that was really cool, really unexpected, and a little freaky ("The computer... it heard me!") at the same time. And it's a fantastic bit of social interaction by the IBM team. They're online, they're listening, and they're responding. Money where their mouth is.

It's also the kind of thing that eventually encourages me to write a several hundred word blog entry about IBM Watson, rather than a short mention that would otherwise be buried in a final conference wrapup entry. Just one word: Hello.

If they're going to take the time to listen to me, even if it's just monitoring Twitter, I am much more likely to take my time out for them. On that note, I must point out that @ToddAlanCrain was also quick to respond to a few tweets after the show, including one of mine. I need to see if any of my after-conference-party friends got to hang out with him at Kimonos on Thursday, like they did with Professor Brian Cox last year.

In an attempt to wrap this up (or at least stop typing), here's one last thing I thought was pretty interesting about the whole IBM Watson thing. There was a Jeopardy category for "Northernmost Cities", where they would list 3 cities and you had to respond with the one that is geographically farthest north. Todd Alan Crain pointed out that this is actually a very difficult category for Watson.

Now, the programmer in me was saying: "That's not hard at all. You just have to look up the cities in a table, determine the latitude, and come back with the highest number. What's so difficult about that?"

Then I realized that while the special case of finding a northernmost latitude is pretty trivial, the amazing thing is that IBM Watson had to dynamically invent that algorithm on the fly. Think about that. Watson didn't just interpret the question and call its FindNorthernCity() method and then it was done. It had to deduce and create the algorithm in real-time. Try writing that code.