For reasons that would be too boring to explain, I was installing Domino on a CentOS 4.x server rather than a 5.x server (CentOS 5.x being a pseudo-supported version, since RHEL 5.x is supported). This naturally caused problems. For the sake of Google searchers who might have some of the same problems I did, I documented the issues I had installing Domino on Linux, including a happy ending in which the installation was successful.

About SnappFiles: Quickr On Your iPhone (Tuesday, Feb 2) 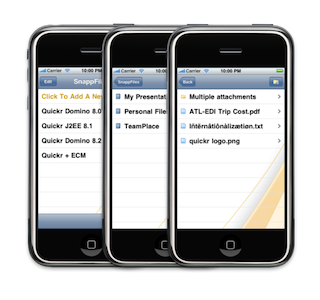 Late last week, we got notice that my pet iPhone project (SnappFiles) got approved for download on the Apple App Store. Yay! We got hundreds of downloads in the first 48 hours and some great feedback so far.

What is this SnappFiles thing? It's a way of accessing your Lotus Quickr files from an iPhone or iPod Touch (or, in a few months, your new iPad). Works with Quickr 8.0 and higher, both the Domino and the Websphere versions. It uses the native iPhone viewers to display files, so any file format the iPhone can natively view can be used to open a Quickr file.

For a general description of what the app does, Rob Novak -- owner and intergalactic leader of SNAPPS, aka "my boss" -- did an excellent overview on the day it was released, and Paul Mooney has a nice writeup with lots of screenshots. I also put a short demo video up on YouTube, if you're a visual learner:

A few common questions we've received in the past several days: