The January 2010 Blog
send me a comment
Links To My Lotusphere Session Materials (Sunday, Jan 31)

[ permalink ] [ e-mail me ] [ ]
Sorry it took so long for me to post my Lotusphere session files. Slides and other related materials for the sessions are available for download at the SNAPPS download site. Just click on the "Lotusphere 2010" link in the left-hand navigator and go from there. They are also linked to from the Presentations page on this site.

One of the things that took a really long time was getting the 11 minute video of how to create a native iPhone app to an acceptably quality for viewing. The video I played during the session was over 3 GB in size (super high-def to get the best quality on the big screen in the session room). I obviously couldn't and didn't want to upload such a giant video to Vimeo, partially because it was too darn big, and partially because Vimeo was going to scale it down after it was uploaded anyway, so you automatically lose quality. Here are the settings I ended up using: 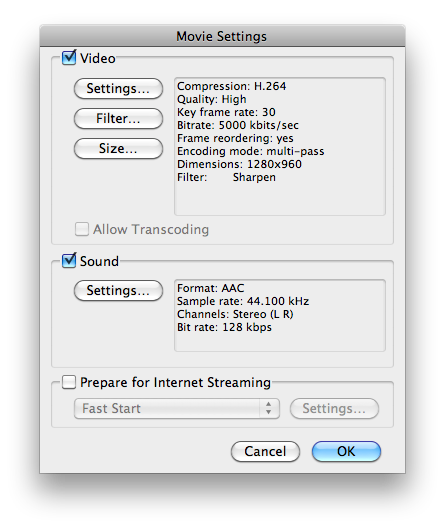 That produced a 231 MB file, and it looked good enough for me after upload and processing. I'm actually not crazy about the audio quality (too much sibilance, I also have several vocal tics that would have been good to edit out), but after messing with the video settings and waiting 2 hours for each new output file and many more hours for each upload, I finally just called it "done".

Lotusphere Blur and About My Sessions (Wednesday, Jan 20)

[ permalink ] [ e-mail me ] [ ]
As with every year, this seems like the busiest Lotusphere ever. I've barely slept and I haven't... stopped... moving... All good stuff, but a few side effects of that:

First, I'm going to do a writeup of the conference after it's over. There have been some interesting announcements this week -- I'm sure you've read about them on many of the other blogs on PlanetLotus, so it's not like you're missing the whole confence just 'cause I'm not blogging it. However, I was lucky enough to be in the blogger program again this year, which has given me some access to people and information that might make for a few interesting comments when I get to do my writeup.

Second, me and Bruce have recorded two Taking Notes Podcasts already during the conference, and we'll be doing at least one more before we go home. Take a listen to those to hear some of my current thoughts on the conference.

Third, I presented my iPhone development session this morning and there are a couple things to mention as far as that goes:

[ permalink ] [ e-mail me ] [ ]
General Lotusphere reference: here's a nice map of the Disney Boardwalk, with relative positions of the Swan, the Dolphin, and the Yacht & Beach Club (click on the drawing for a larger version).

I think there's a shortcut between Y&B and Dolphin if you go over the parking lot and through the woods, but that's not clear on this picture. You can probably figure it out with a Google satellite map of the Dolphin though.