[ permalink ] [ e-mail me ] [ ]
My mind and body are recovering from Lotusphere this weekend. There was an incredibly wide breadth of announcements, and far too much to do. I would have blogged while I was there, but I was only really in my hotel room for 5 hours a day (and that was at night, to sleep).

Patterns Emerge
The theme of this year's conference was technically "Emergence", but it was better stated by Mike Rhodin in the Opening Session as "Patterns Emerge". IBM has been very busy studying and trying to make sense of patterns of use and purchasing by their customers. Old concepts of knowledge management didn't work because... well, they required actual work from the employees of an organization. IBM is pushing the whole social software concept as a way for employees to add and discover knowledge as a part of their normal usage of software and applications, and the software can help us find the useful patterns that emerge.

It's very unfortunate that the talk by Bob Costas wasn't more universally received, because he actually could have made a fantastic point about all this. His job in the sports business requires him to aggregate and filter an incredible amount of statistical information and to present the relevant information to his listeners. An example he gave was that someone told him in 1992 that it was "the year" for the Red Sox to win the World Series because "they always win the year after a Russian revolution" -- not only did this prediction not come to pass, but it was based on faulty statistical analysis. We have this problem in business too, where seemingly statistically related events actually have no correlation at all, while others have incredibly strong coupling. We need to find the relevant patterns.

The Partnership Pattern
Partnerships make your software brands stonger. IBM estimated that there was an 80% overlap between the top 100 customers of IBM and the top 100 customers of SAP. Hence the "Atlantic" project to bring tighter integration between SAP and IBM. Lotus Connections will integrate with SocialText and Confluence wikis, among other things. Blackberry devices will have a Connections client. There's DWA on the iPhone and Notes 8.5 on Mac and Ubuntu.

The Pattern of Consistency Across Products
Lotus Notes is getting to be less and less the red-headed stepchild of the IBM product line. Volker talked a little about the consistent look and feel across the product line demos, and Bruce mentioned the "OneUI" initiative that's driving this. And there is, of course, the ongoing integration efforts across products: like the Dashboard Accelerator that works both on Portal and the Notes client, or the fact that the next beta release of Symphony will have a Notes API and full Quickr integration (think "File - Save As - Quickr Document").

The Mobile Pattern
It's a mobile world out there. There will be Lotus Traveler for Windows mobile devices, a DWA client for iPhones, increased Blackberry integration, and one of the Lotus guys in Ask the Developers even mentioned that he had been prototyping a Symbian app for Domino mail (possibly available in the 8.5 timeframe). There's a Mobile Bonus Pack shipping with Notes 8.0.1 with seemingly LOTS of mobile goodies. Lotus Connections will have a replication option so people can work offline. The Domino server continues to use less and less bandwidth, with DWA "Lite" in 8.0.1 and full gzip compression for applications in 8.5.

The Pattern of Flexibility
People want choice in how they use their products. Domino 8.5 will have a "unified directory" option that allows us to much more easily integrate with other directory systems. Future versions of Notes will include Dojo as a "native" Javascript framework, but we'll be able to switch that out for any other framework we're comfortable with (like Ext.nd). Bob Balaban even showed how we might be able to better control and customize the entire display of Notes web applications in the future, at the Domino server level instead of the Notes application level. The Notes 8.0.1 Sidebar "Widget Wizard" allows drag-and-drop sidebar component creation for things like Google Gadgets, and you can even distribute your favorite widget via e-mail -- this is something that end users can do.

The Pattern of Internationalization?
They also announced a language translation plugin for Symphony and a language translation service for Connections -- so, text translation on the fly. I would love to see this type of thing extended to Lotus Notes as well (DWA would be a good start). It would also be great to see focus on making it much easier to write multi-lingual Notes applications. This is possible now, but there is a lot of room for improvement.

And finally, a little sales pattern that IBM is predicting: 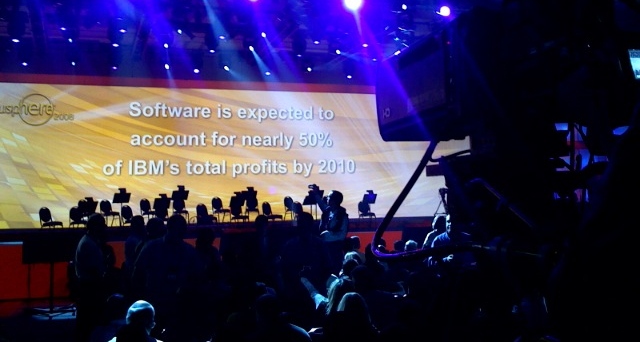 It is now snowing here in Peachtree City. This happens about once every 3 years. I predict two things will happen:

As long as all of this stays north of the Florida border, I think we'll be okay next week.

[ permalink ] [ e-mail me ] [ ]
This year, one of the very interesting additions that Ben Langhinrichs made to his annual Lotusphere Sessions database is the ability to submit a question or suggestion to the speakers of a session. As long as the speakers are replicating their copy of the database with the master copy on the Turtle Partnership site (there's a button that does this for you, so it's easy), they can get the questions/suggestions and react to them.

For reference, here are the links to my sessions in the online database:

Turns out I've already got a question from Karl-Henry Martinsson. He was asking about the first session, but the question (and answer) apply equally to both:

I am still stuck on Notes 5, even if we are in the (slow) process of moving the servers and users to Notes 7. Notes 8 is not an option right now, due to the high system requirements (most of our users still only have 256 MB memory!).

Will you cover earlier versions as well, or will you be focusing on Notes 8 features? I hope you will at least throw us developers stuck on older version some bones.

Looking forward to see your presentation!

And the answer is: virtually everything my co-hosts and I demonstrate in both sessions should at least work in Notes 7. I'm doing a lot of the code testing (and sometimes writing) in Notes 7 just to make sure.

The reason is, the goal of both sessions is to give people code and techniques that they can go back and use RIGHT AWAY. It would be great if everyone upgraded to Notes 8 right away (and there are compelling reasons to do so), but we don't want to leave behind the people that are still on Notes 7. Unfortunately I can't guarantee that anything will work on versions earlier than 7, but I think compatibility with 7 was a good goal.

Thanks for the question Karl-Henry!

[ permalink ] [ e-mail me ] [ ]
I've had an enormous struggle over the past few weeks with my old enemy: time. One-off events include (in reverse chronological order, just because):

There may be more; those are the things I can think of as I'm typing. That is all coupled with a number of ongoing events, including:

There's probably more to that list too, if I really think about it -- but I'd rather not think about it. December-January is always the craziest time of the year for me...